Turned out I found the time for a last post before I leave for Norway.

I finished the last of the Pegasus Knights yesterday night - some of my neighbours were having a christmas party, so I figured I might as well get some painting done, with their music and noise keeping me awake anyways. 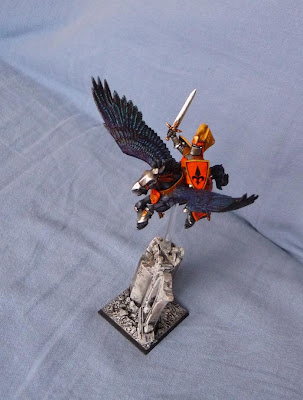 So, what have I done? Well, it took me some time to find the technique and effect I wanted, but finally I ended up using Blazing Orange glazed with Blood Red as the darkest shades, and mixed in more and more Golden Yellow for the highlights. This has made the Gallant and his mount much lighter compared to the two other Knights' clothing, but as his mount is so much darker, I think it evens out. To make him stand out more (and 'cos Iyanden Darksun didn't look very good with all the orange), all the freehand patterns were done in black. Matches the dark mount as well, I hope? 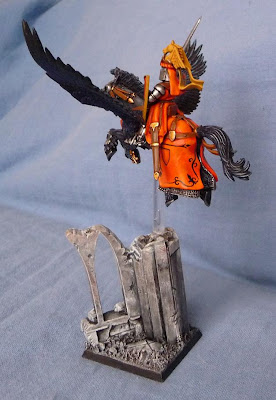 As you might have noticed, I've darkened the mount somewhat from it's pidgeon'y past, and used various shades of purple and blue, instead of grey. I hope it looks more like a raven now, but still not boring and monotonous when compared to the other two Pegasi.

So here they are, all three finished and ready to fight evil and rescue damsels in dire need of aid: 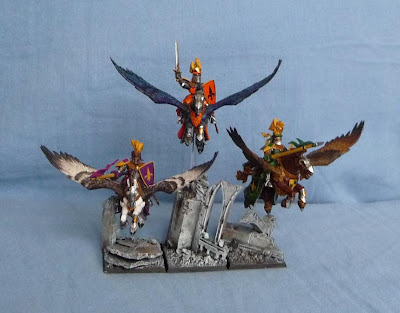 I'm not sure it's easy to spot on this picture, but I quite involuntarily had to reposition the green one. I was so overjoyed this morning that I was finished, and the light was good outside - so I thought I should get some decent pictures - that I didn't take the necessary care one should take, when I moved my models over to my couch, and set it up for a photo-session. Something (I think it was a pillow, but the incident was so traumatic that I'd rather not think to much of the details...) toppled over my brave Knights, and I heard the loud *crack* of plastic breaking.

Luckily, it was just the transparent pole holding the model onto the base that had broken off, but nevertheless, I spent one and a half hours removing it completely, drilling holes in both base and model, find some wire of decent length, and then glue it all together again. Owh, and of course fix the paint that had flaked off as I worked. Pfew!
In the end, it's turned out to be a blessing in disguise, as this enabled me to reposition the green Knight so it can rank up with the other two - earlier I was a millimetre short or so, if I wanted them to rank up and face the same way, but now they can all look the same direction! Even Johan at GW should be content now, their inability to rank up was his only critisism of the unit when I showed it to him on tuesday - apart from the black wings, but they weren't finished at that point)
My only concern now is whether my Knights will survive the flight to Norway...


I doubt I'll make any posts in Norway, and as I have an exam mid-january I doubt there'll be much activity from me until I'm through with that. But after that, I have some Dragon Ogres very much in want of some colours, plus a Sorceror in the making, so it's just going to be a short break.
Wish you all a very merry holiday and a happy New Year!
Posted by noeste at 14:41 6 comments:

The Pegasus Knight in greens is finished, hope you'll like him! 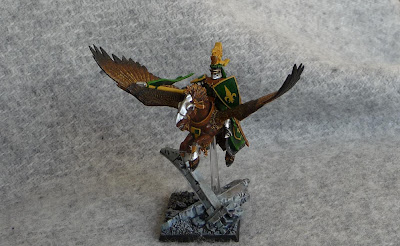 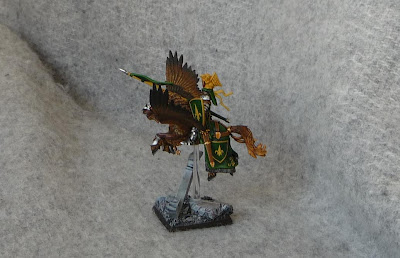 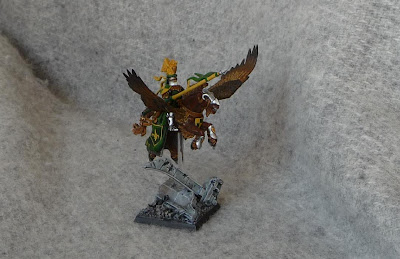 As suggested by Rogue Pom, I have tried to bring more yellow into the highlights of the cloth, making them a much lighter green - personally I think it looks better now, although I think I could've made it a tiny bit lighter, as it still is darker than the purple on the first Knight.

Progress on the last Knight's going slow, but I hope I'll have him finished before I leave for Norway (9 days to go...). I've started redoing the orange, using a lot more Blood Red to create shade, but still on a experimental stage, so not sure where it'll end just yet, heh.

If I don't get finished before I leave, then I wish you all a happy Christmas holiday!
I'll bring my camera back home and see if I can catch a picture or two of my old models. Maybe I can challenge my brother's army in a battle for our dining room's table top, heh.
Posted by noeste at 11:40 3 comments: 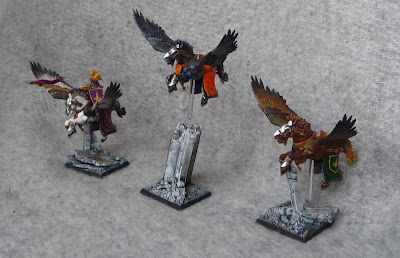 As you can see, the first I started on (the one most to the left on the picture above) is finished, rider and all. I'm really pleased with how he turned out in the end; just hope the use of yellow will transfer well to the two other models. Yellow, apart from the metallic and leather colours, will be about the only colour the three models will share, tying them together. Or that was my plan, still has to see how it turns out in the end. 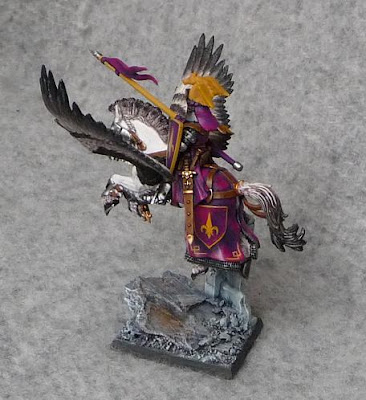 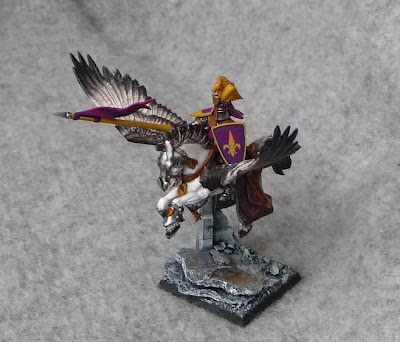 The brown Pegasus clothed in green was the second I made, but apart from the colours I changed little from the first one. Initially I wanted to make it look like a brown-feathered eagle, as the first one had been inspired by a hawk, but figured it needed something extra in the end, so I gave it a touch of yellow (Vomit Brown) to add some contrast and texture to it.
I'm not as happy with the green as I was with the purple - I tried mixing Dark Angels Green with Goblin Green in the same way I had mixed Liche Purple with Warlock Purple, but the outcome was a way too flat colour, so I made my darkest colour Choas Black+Dark Angels Green, ad used Golden Yellow to create the lightest colour. Overall, it has resulted in a much darker caparison, but I hope it isn't too dark and that it merely serves to draw attention to the heraldry and other freehand I've done in yellow. All in all I'm happy with it, and think it'll look as great as the first as soon as the rider's done. 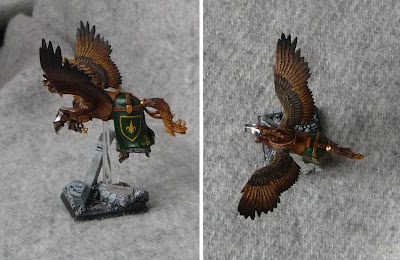 Last, there's the Pegasus of the Gallant, the black one - or should I say grey? I wanted it to look like it had raven wings, but all black became too dark for me. I've tried to add some blue-grey-purple'ish colours, but in the end my brush went for one of the grey paints, and now I'm not sure what it looks like. I fear it's pretty close to a grey city-pidgeon - not quite fitting into the "bird of prey"-theme I thought I had going on... 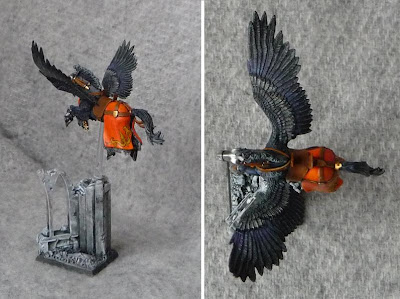 "Not quite ..." sadly sums up this model, as it's the one I've been struggling the most with and the one I'm least happy with. In fact, the only thing I'm completely happy with, is its base...
In a previous post, I believe I mentioned doing some Greenstuff work on its caparison, and as you can see I have covered the shield, as I wanted some space to paint a bit extra freehand stuff. Now that I've gotten my freehand design onto the model, I'm not sure I like it anymore. The more I think on it, the more I want to repaint the whole caparison, the colour of the cloth is too vibrant and strong, it doesn't fit in with the two other Pegasi when placed next to each other, who got rather dark colours for their caparisons. What to do, what to do.. Any suggestions?

I am really happy with all the bases though - finally found some use for some old pieces of city ruins that I got at some prize draw or something. A saw, my hobby knife and some files, soon reduced the ruin to even smaller pieces, and after making sure any iconografy belonging to 40k was totally removed, I glued them onto the Pegasus' bases, and added sand and pieces of barch. I've also had great pleasure experimenting with weathering effects on those pieces of rubble, using a sponge with lots of different browns, black, white and grey on it, and just press it randomly over the ruins. Painting stone's never been more fun! I just need to add some grass, but I know I got some back in Norway, so it'll have to wait 'til I get there.

Any critisism and/or suggestions that can make the Pegasus Knights look better will be greatly appreciated - christmas is soon upon us, and I really want my brother to like this gift! So please help if you can!

- - -
Edit:
Here's a crude drawing of some alternative freehand designs for the black's caparison: 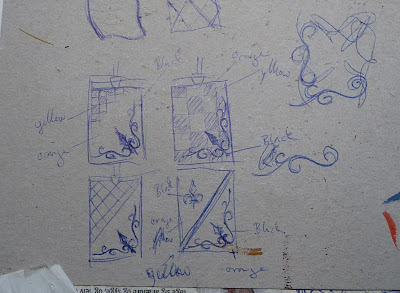