Sorcerer of Slaanesh and new pictures of Wood Elf Highborn

Here's the Sorcerer of Slaanesh I built out of the Empire Battle Wizards box, and he's now awaiting judgement in Copenhagen's Games Workshop, along with my Amethyst Wizard. Saw some very nice entries when I dropped my miniatures off this morning, I think it will be tough!

Managed to take some pictures of him before I left him at the store; in a way it is wrong to say he is finished, because I had initially planned to paint a large Slaaneshi freehand design on his back, but at 2:30 am this morning, I simply couldn't keep my brushstrokes straight, and had to leave him as he is - but maybe I'll finish him properly when I get him back. Might rebase him as well, come to think of it; just couldn't be bothered with building something nicer last night.

Also had some trouble with the undercoating of this model; for some reason, the white spray left rather large pellets of paint on the right side of his cloak, which made an uneven and rugged surface - hopeless to try any smooth blending or shading in that area, sadly. Awh well, really happy with the flames and his book. The OSL could maybe have been more smooth, but I think it's OK. 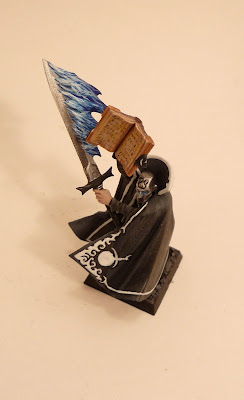 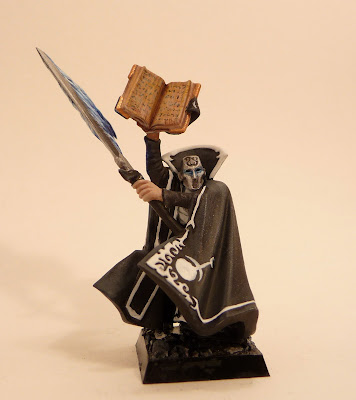 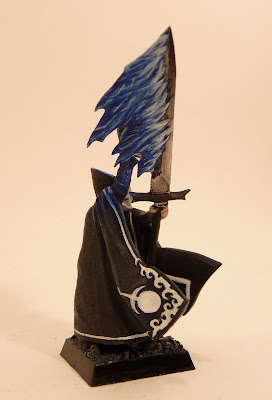 My Wood Elf Highborn was returned to me when I left my pair of wizards, and I've taken some new pictures of him, which does the miniature some more justice than the poorly lit and unfocused pictures GWCopenhagen took for their facebook site...

I've already introduced him in a previous post, but with these pictures I can't but repeat my satisfaction with the blade and the base of the model. 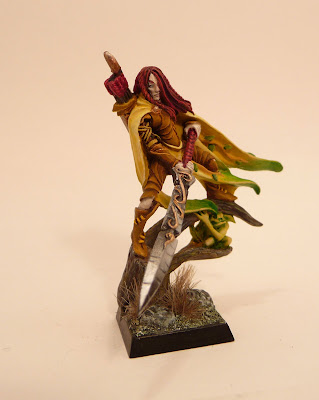 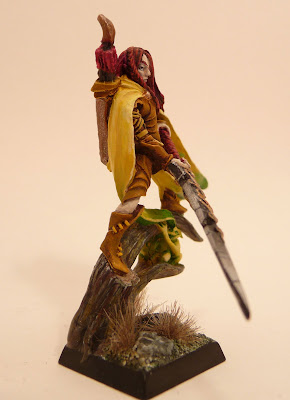 Labels: Knights of the Brush, Warriors of Chaos, Wood Elves

Wizard of the Amethyst Order

The first wizard is completed!

Or, while taking these pictures, I saw I had forgotten to paint his ears and the edge of the base needs some cleaning, but I've just packed away my photobox, so you'll have to live with these pictures for now at least.

I need to get some whiter lightsource(s), I think: my pictures get all yellow-tintet and who knows if it affects my painting... But that's for the future! 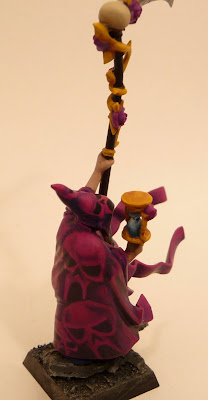 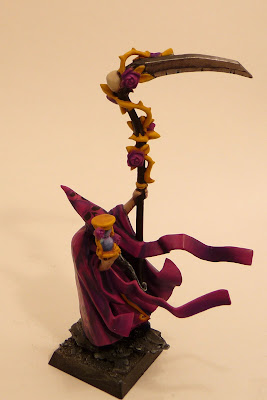 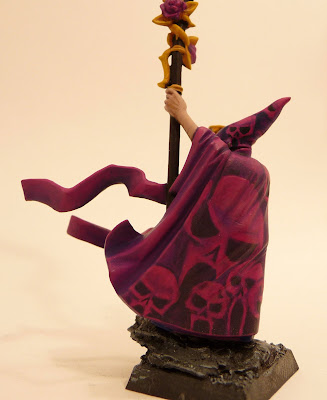 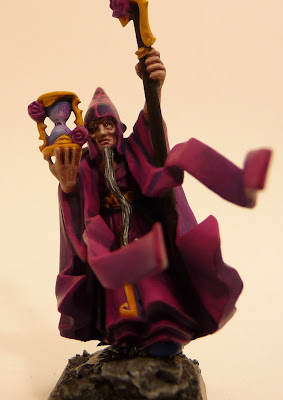 Labels: Empire, Knights of the Brush, Painting and Modeling

Just thought I'd give you all a small update on how my entries for the monthly Knights of the Brush painting competition are progressing. Starting to feel a bit of a time pressure rising; the deadline is the 29th of October, at 10 am, and I can't claim to be a swift painter. But at least both of the models are assembled and primed, and I've been fiddling around with some colours and settled on themes for each of them.

First out is this fella. His main colours will be black and white, to better fit in with my Slaaneshi warband. I've sketched down some freehand motiphs, which hopefully will be enough to mark him as part of my army, once it's all done. The staff-head was created by pinning the burning sword onto a staff - I do hope it won't disqualify this model from the competition; conversions are not really allowed, but as I have only used parts from the Battle Wizard-box, I hope it'll be okey. After all, the winner of last month's competition had removed the tree-spirit from the Wood Elf Highborn... But we'll see! 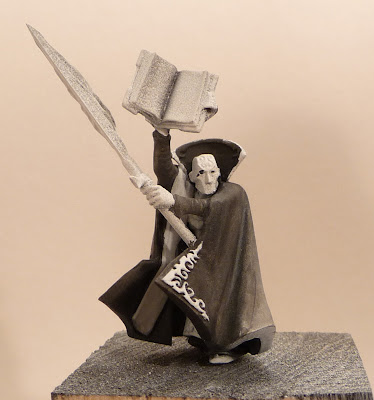 ...come to think of it, I did cut, reposition and pin the hand with the book, and also removed the pharaoh-ish beard-compartment from the mask - which actually saddened me a bit as I found the thing itself rather cool, but I was forced to do it, as the head wouldn't fit onto the body, unless I cut off the beard-compartment. Awh well! At least I think he looks rather decent this way, so should he be disqualified, I'll still have a nice addition to my army!

Then there's the second mage.
I've not made any conversions to this guy, so no danger of him being disqualified! The idea is that he'll be using the Lore of Death, and I felt that it should be quite obvious to any observer that he is - apart from the scythe and hourglass... As the previous wizard, he's still at a very early stage, but the freehands are at a slowly, but nevertheless steady pace turning out the way I want them to. 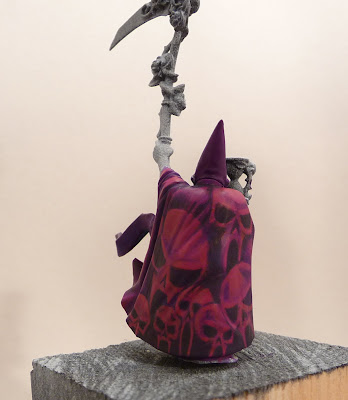 Hope you like them so far, I'll do my best to slap some more paint on them in the following days, and update promptly!
Posted by noeste at 19:35 4 comments:

Labels: Empire, Knights of the Brush, Painting and Modeling

Afraid I havn't got much to show, when it comes to progress on my Empire Battle Wizards, which are the chosen model(s) for this month's Knights of the Brush - I have assembled them, even tried to sneak in some minor conversions, but in case that will get me disqualified, I've assembled a second mage. I just hope I have the time to get them both painted the way I visualize them.

Either way, the guys over at GW Copenhagen have finally uploaded pictures from last month's competition, so I thought I'd share a rather badly lighted and poorly focused image of my contribution. 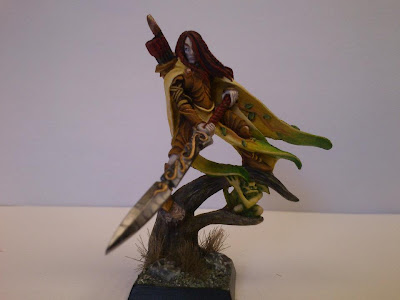 As you can see, I went for some rather unorthodox colours for my Highborn; my model was the only which wasn't predominantly dark green with bronze armour.
I still need some practise when it comes to blending, but hopefully these monthly challanges will give me the motivation to push for and eventually master more fluid transitions between colours. All in all I'm quite happy with him; I really how the tree's barch turned out and the blade - although the quality of this picture doesn't render either very well.

Hope you all like him, I'll get some better pictures when the miniature is returned to me.
Posted by noeste at 22:30 3 comments:

Labels: Knights of the Brush, Painting and Modeling, Wood Elves

Roughly half a year since my last update, and well over a year since I showed any pictures of painted miniatures. But now I'm back; I started painting again this summer, loaned a finecast Orion model from a friend to test out and rediscover long-forgotten techniques and the joy of painting, and have done a little painting here and there since then.

Sadly I do not have any paictures of Orion at this point; I did the painting at the owner's place in Norway, and it wasn't finished when it was time for me to return to Denmark again after the holidays. But I do hope to finish him during the christmas-vacation, and I'll make sure I get some photos in return for painting up the model.
I have to say, though, that although finecast is lighter and the models don't fall over as easily or break apart like the old (unpinned) metal models did, it is simply not of high enough quality at this point. I very nearly went mad from all the air-bubbles as I worked on the model; while the old metal models might have needed some greenstuff gap-filling here and there, the resin finecast require sculpting! In no way is it more user friendly. Luckily I have some experience with greenstuff, so I managed to patch him together reasonably well, but yea.. I think GW should have tested and perfected finecast more, before releasing it.

But enough whining about finecast... Just damn shame about them bubbles!

So, what else have I been painting?
Well, the local GW has started (or have had for some time, although without me knowing) a monthly painting competition, Knight of the Brush, where all the contestants gets a month to paint the same model, chosen by the winner of last month's competition. So I dusted off my brushes and paintpots (actually had to replace a couple of colours, as they had dried up...), and bought myself a Wood Elf Highborn for september's competition.
Sadly I didn't make it to the top, quite high standard of the local painters - which is very nice in my eyes. I did score some extra points for "daring to be different", as my model was the only one not painted with green as the dominating colour. At the moment, the model's on display in the cabinet at GW here in Copenhagen, and I have no pictures myself, but the staff has promised that they'll get some pictures taken and publish them on their facebook profile, like they have done for the previous competitions - although they are taking their time!
Either way, I'll take some pictures myself when the model is returned to me at the end of the month.

Speaking of the local GW, their 14th birthday coincided with the Dreadfleet release last saturday, and the whole day was filled with events and competitions. The staff and several regular gamers had baked cakes for the occation; and also dressed up as Zombie Pirates - awesome! I got my ass handed to me in the "Ogre Olympics" (I'll do my best to get ahold of the rules; although rather unbalanced and mostly down to pure luck, it was tons of fun) and of course I participated in the speed-painting competition! 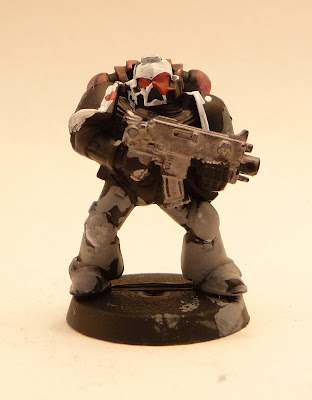 Alright, the poor Space Marine may not look like much, but I think I started out pretty well, lining the shoulderpads, painted the helmet white wihtout drowning all the details, had changed colour and done one eye lense, when the judge yelled: "First minute's up! Time to change hands!" ...and it sort of went downhill from that point on.. First of all, I'm NOT ambidexteritous, not the least. A minute later, we were told to hold the brush in our mouths; next minute between neck and shoulder (I can tell you, it is hard to dip the brush in a pot of paint, when held in that position!); then back in our off-hand. Owh, let's make this fun, throw in 10 seconds with eyes closed!

.. Well, it was fun, and it's a fine start on my return to the hobby - I think!
Next month's model for Knights of the Brush is the Empire Battle Wizard - no conversion, no greenstuff, only bits from the box. I'll pick up my box tomorrow, and we'll just have to see then how I'm going to model and later paint it.
Posted by noeste at 14:56 No comments: