At long last, Sergeant Lorenzo is finished!
One of my favourite sculpts among the Space Hulk miniatures, with his characterful pose and facial expression, and the lovely detailed and unique armour. In the end, I'm very happy with how he's turned out, and I hope you like him too: 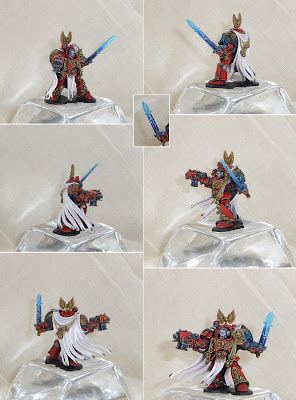 (Click to enlarge picture)
Painting this guy has been quite the battle, and several times I caught myself wondering wether this miniature wanted to be painted or not. Certain areas I've had to repaint over and over, 'cos I simply couldn't get it right, and certain parts I've had to remove the paint with sandpaper, before starting all over again with the brush. For example, the swordblade alone took me at least 6 tries, and more than 3 hours to get how it is now. For some reason I couldn't get the red right at his armour when I first started painting him, and I've completely lost the count of how many layers of diluted paint I've glazed most of it...

But finally, he's finished, and I can focus my entire attention on my upcoming exams in the last weeks of June. Until they're over and done with, I won't have time for painting nor modelling, and my blog will be more or less in hibernation. Come July I should be back though, laying my brush onto more Blood Angels or maybe some Genestealers... Only time will tell which shall be my target!
Posted by noeste at 16:06 5 comments:

Turns out the first images I posted of brother Deino were too small, so here is some larger ones. 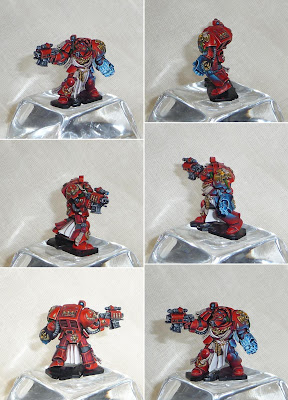 (click image for even better view)
At the moment, the general opinion seems to be that I should only add battledamage to those models it's sculpted onto. Guess I'll follow that recipe, and then when they're all done, some with battledamage, some without, I'll make up my mind as to whether it looks good or incoherent with such differences in between the models.

The next model is advancing slowly but steadily, I havn't been able to do much painting yesterday nor today, but maybe later tonight.. I'll do my best not to keep you waiting!
Posted by noeste at 18:44 5 comments:

Well, as yesterday's sneakpeek might have given out, I'm currently working on some Space Marines, namely the Blood Angels off last years reissue of the Space Hulk game. And first of the gang to be completed this side of New Year, is Brother Deino - hope you like him!

I don't think I've had these on the painting table since october or something, and now that I've picked them up again, I've made some changes in the way I paint them - hopefully for the better. Mainly, the mix of red I use now, is not as dark as earlier, and I've tried to define the edges more with some extra highlighting - much lighter than before. Also I've worked on my technique when it comes to my NMMs and the OSL from the Powerfist. On top of that I've made minor changes to the painting scheme: parts of the Stormbolters will be red, many teardrops/blooddrops will be done gold (those that look like gems will still be green emeralds, but many of the blooddrops don't have a gemcasing sculpted, and as such looks wierd painted green, in my eyes) and finally the thin wires will be done green. And for the cloth, I've settled for white - strictly speaking, this is not a change, as Brother Deino was the first of the Marines I've painted with any cloth on him, but I think I initially had planned to do it some other colour...

I'm still undecided as to how much battledamage I'll paint onto each model - the sculpts themselves varies a lot on that subject: some, like Brother Claudio and Sergeant Lorenzo, got large gaps and holes in their armour, while others, Brother Deino amongst them, look like they're coming directly from maintenance... Any thoughts on the matter? Should I dirty them up a bit, some scratches here and there; make it look like they've fought their way through a horde of Genestealers? Or should only the models with battledamage sculpted onto them, recieve such a treatment?

Either way, Brother Deino is not varnished yet, so if you have any suggestions or any critisism, don't be afraid to empty your mind!
And in case someone wonders, the thought I had when painting his Powerfist the way I did, was that he's just "turning it on", so to speak, and the powerfield giving the glow hasn't charged up yet, so the backside of the fist ain't enveloped in energy, just yet.
An alternative theory was given to me by a friend upon seeing the painted model, saying that "bitch-slapping" is the way to go, when fighting Genestealers...
Posted by noeste at 18:38 5 comments:

It's been a while, well over a month, but now I'm back! And even though this term's exams are approaching, I'll do my best to get the odd update rolling on this blog every now and then. I might even expand the theme for this blog somewhat, to include another hobby of mine, yet that's something I'm still contemplating... Time will tell!

Either way, I've spent the time since my last blog-entry doing quite the bit of experimenting, painting-technique-wise, and as such I don't have much to show yet, as a lot of time has gone to trial, error and starting over. I have finished one mini, and will post pictures of it tomorrow or the day thereafter, while a second is well under way. here's a sneak peak: 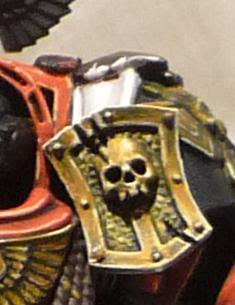 The red (although not very well represented in this picture, and turned way too orange due to light-settings) and the NMM gold, has been the main targets for my mentioned experimentation, and while this picture may not be much to go by, I hope you like it. Stay tuned for better pictures, come sunlight!
Posted by noeste at 22:52 No comments: