So, it turned out that my finecast model wasn't of as good quality as I first presumed, and I've spent the last couple of days filling bubble-holes and trying to correct a huge molding fault. It's as if the two parts of the mold hasn't been correctly fitted, so the rear part of the model is roughly 0.5 lower than the front. So his left arm and leg has recieved quite the bit of sculpting, to correct this. Luckily, the rest of the mold line is hidden by the fur of his cloak, or ran down a undetailed area on his right side, and was thus fairly easy to remove with my hobbyknife. Still frustrating.

Either way, I've decided to make him the standard bearer of my regiment, and have started converting a bit: I've replaced the original head with a regular Chaos Warrior helmet sans horns, replaced the axehead of his left-hand weapon with an axe from the Chaos Knight sprue, and filled most of the holes in his cloak. As the unit will bear the Mark of Slaanesh, I want to reduce the worn look typical to the Chaos Warrior regiments' cloaks and equipment, and make them look a bit more like they care how they look. Sure, they've been out raiding and seen many a battle, but they won't be seen dressed in rotting cloth and rusty armour!

So here's how he's standing at the moment - not pinned or glued to his base yet, I prefer to paint them separately. 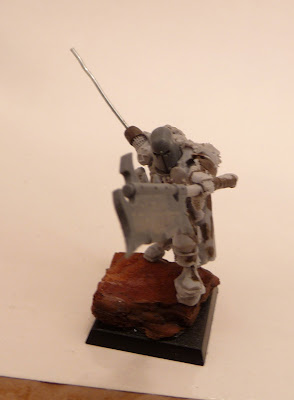 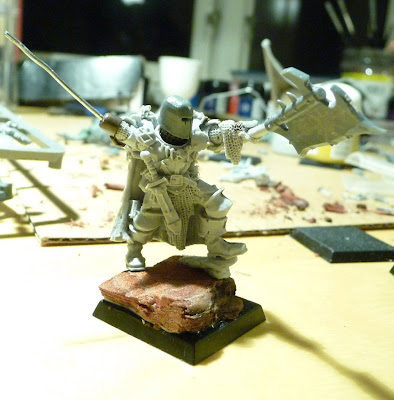 As his right arm also suffered from the faulty moldline, and in addition had two bubbles ruining the chainmail, I thought I'd sculpt the whole arm from scratch, and I hope to finish it by the weekend, so I can start painting next week. Speaking of sculpting, I've giving brownstuff a go at this model, and I'm very happy with how this putty's working. It cures harder than regular greenstuff, making it easier to cut and file should one want to do that, but it also stays more in shape than greenstuff: making it easier to get those sharp and defined edges you want when sculpting armour. Greenstuff, by contrast, acts in a slightly more "liquid" way: if you don't return and work on a spot regularily until it cures, the putty tends to go soft and gives rounded edges - which can work out very well if you're trying to sculpt something organic or soft, like flesh or cloth. So both putties has their uses, and I'm still very much at a learning stage, but hopefully this project will get me a few more steps along the way.

The standard itself will also be scratchbuilt from a 2mm iron pole and some putty, and I made my first attempt yesterday: 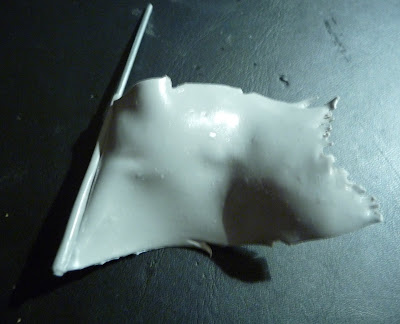 I got some nice tips from Mati over at Massive Voodoo on how to sculpt cloaks and the like, and used the techniques he suggested when I made the flag (as you can see from my setup below, I opted for paintpots instead of wire, as the flag was so large). 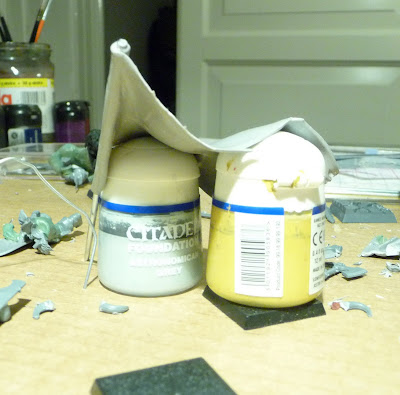 The technique seems to be working fine, but I'll have to remake the whole thing and make some minor adjustments before it gets where I want it, I think. For one thing, I managed to make it way out of proportions, it's too large! Secondly, a combination of too thin layer of putty and the wrong ratio of putty-parts made the flag slightly softer than I'd like. But I'll give it a new go and hopefully improve the outcome.

I have been debating with myself whether a flag or regular banner will look best on the tabletop; any thoughts from you guys?
Posted by noeste at 17:57

Labels: Knights of the Brush, Painting and Modeling, Warriors of Chaos