Arrived safely in Norway this evening, but managed to shoot a couple of pictures of my take on the Chaos Exalted Hero, before dropping him off at Games Workshop and catching my plane.

After talking to some friends, I decided to go for a traditional banner instead of a flag, and added onto the plastic banner from the Chaos Marauder Horsemen set. Got a couple of spare parts from the old mounted Champion of Slaanesh and the Dark Elf Cold One Knight boxes. I didn't have time to paint any freehand on the banner, but after I return to Denmark I'll see it through.

I've used a rather limited palette on this piece: only Skull White, Chaos Black, Shadow Grey, Mithril Silver and Scorched Brown (except on the base, which got a few colours more - but I'll make a short tutorial of it later), which I think has worked quite well to tie the whole model together. Granted, not the typical colours of Slaanesh, but I really like the concept of using light and clean colours to represent darkness or evil. And while I have nothing against pink personally, I do find it slightly over-used, so I wanted to try something else to make it stand out more.

With all the armour on this model, I've had ample opportunities to practice shading of metal - or painting true metallic metal, if you like - and I really like the process and results. To top it off, it goes faster and faster for every part, and I hope to keep this level up on the rest of the unit. I have mentioned in an earlier post, I believe, that this miniature will be part of a regiment of Chaos Warriors with the Mark of Slaanesh, and when I get back to Denmark I hope to be able to complete the first rank sometime february. There is some rather extensive converting and sculpting involved, and I have to figure out how to make a couple of things in sculpting putty as I go, but having one model finished surely helps on the motivation!

But now time for some pictures: 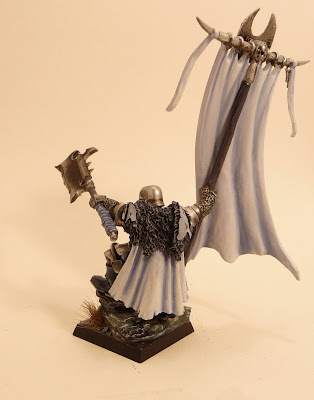 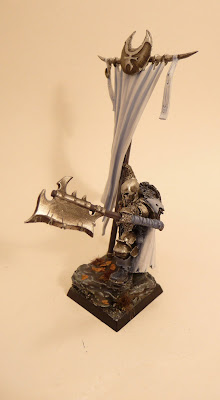 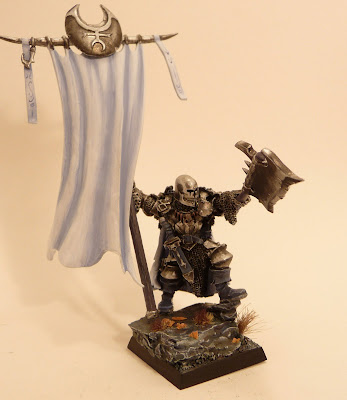 Hope you like him! As always, comments and criticism is welcome!
The voting for december's Knights of the Brush will take place tuesday the 27th, so if you live in or near Copenhagen, feel free to drop by GW's store there, as I'm sure there will be several really great entries this month as well!
Posted by noeste at 22:43

Labels: Chaos Warrior, Knights of the Brush, Painting and Modeling, Warriors of Chaos